A horse-drawn car tour by the Historical Center

The tour by a horse-drawn car through the Historic Center of Cartagena is one of those activities that cannot be missed when you come to “La Heroica”. Whether you like traditional tourism plans, or you prefer to spend your vacation without rushes or rows, this quiet adventure will surely meet all your expectations. A visual and cultural tour through the most traditional streets downtown, where you can delight with the colonial architecture and learn a little about the history of this wonderful city.

Our tour began in the “Plaza de los Coches”, next to the “Torre del Reloj”. In the company of my daughter we set to take this tour in which we would have the opportunity to ride along beautiful streets while we were comfortably sitting in a classic car pulled by a noble white horse. We were immediately transported in time, I, a jealous father of the colonial times, in the company of my beautiful princess enjoying a traditional Sunday in Cartagena. 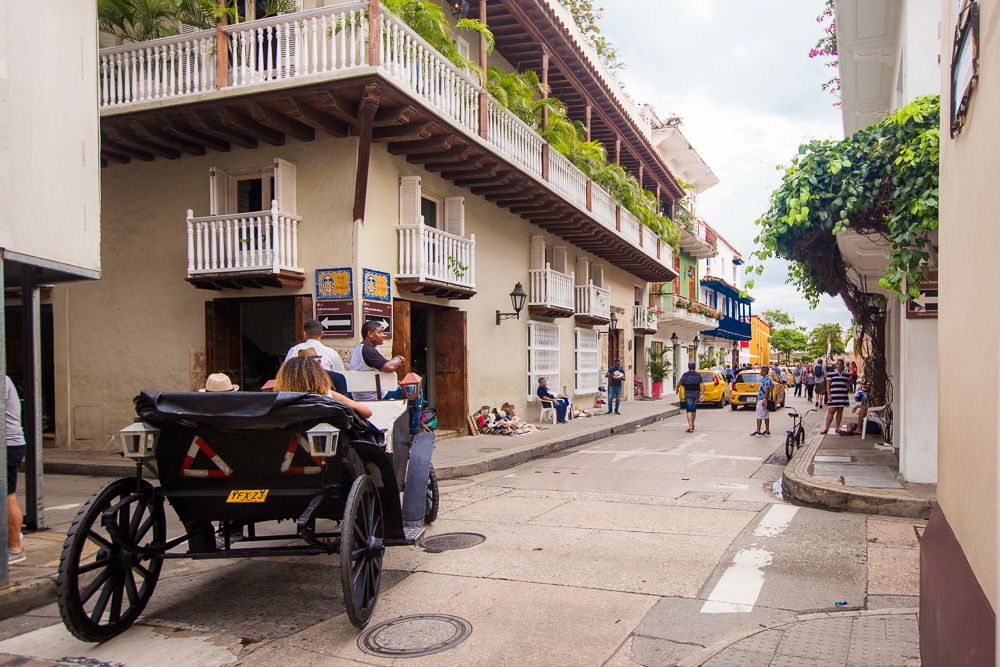 After agreeing the price of the ride with Orlando, our coachman, which depends on the duration and the route chosen, we started our journey through the Historical Center of “La Heroica”. This pleasant ride, of approximately 30 or 40 minutes, has a value of $80.000 COP and it allows you to travel through the most striking and colorful historic streets of Cartagena.

The car began its march down by the “Calle de las Carretas” heading the San Diego neighborhood. “On this road they used to accommodate all the wagons at the time of the Colony, and it was the fastest way to transport the munitions from “Las Bóvedas” (the vaults) when the city suffered an attack”, Orlando explains us while my daughter and I felt like characters from the royalty. We continue through the “Calles Primera” and “Segunda de Badillo” towards the same direction. The coachman tells us that this road is so called because it was the home of the famous Spanish visitor and who was governor of province of Cartagena in 1536, Don Juan de Badillo, who lived on both roads. He was the one who imprisoned Pedro de Heredia, founder of the city, and subjected him to a tortuous judicial process.

We crossed to the right and kept going through the “Calle del Santísimo”. We almost didn’t care about what Orlando was telling us because we were focused on taking pictures and shooting videos of these gorgeous houses with imposing and charming balconies. We took a turn to the left and continue along the “Calle Tumbamuertos”, where in the past more than one burial procession suffered the fall of the corpse due to the poor condition of the road. 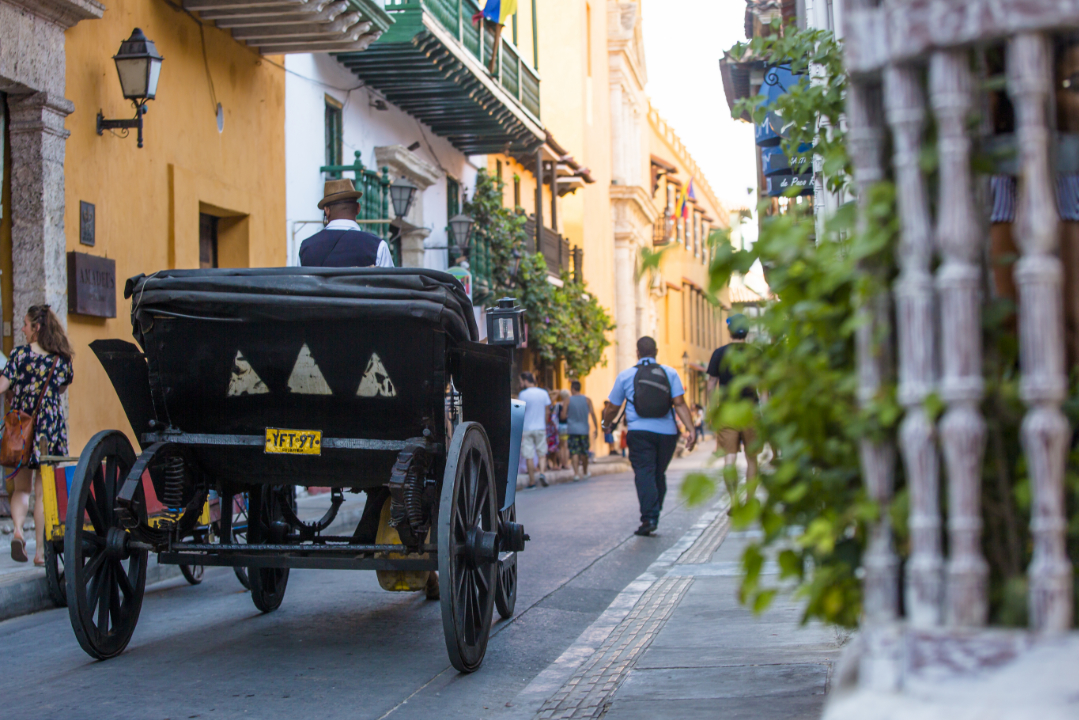 We arrive at one of the most traditional squares and one of the meeting places of the traditional San Diego neighborhood, La Plaza Fernández de Madrid, around which there are different restaurants and cafes that take advantage of the colonial charm to offer captivating spaces. Then we pass by the church of “Santo Toribio”, where we are told that there is a cannonball embedded in the wall, which was fired during an attack the city suffered in the Spanish colonial era.

We continue towards the sector of the “Baluarte de Santa Clara” by the “Calle de Las Bóvedas”. Before arriving we find a gallery of stores selling handicrafts and souvenirs. These places served in the past as spaces to store ammunition and later as prison cells. This sector is known as “Las Bóvedas” and it is another of the places of reference for tourism in Cartagena.

As if we were not sufficiently enchanted and amazed, we were lucky enough to have the final part of the tour along the wall just as the sun began to fall. We asked Orlando to sacrifice the final segment of the route and allow us to spend some time in another of the iconic “Baluartes”, the one of “La Merced”, to appreciate this magical moment when the sky was dyed with a mixture of yellows and reds.

It was not an easy decision to make because we would miss the spectacular churches of “Santo Domingo” and “San Pedro” through the “Calle de Don Sancho”. We agreed to walk by them later, which is not easy to negotiate with my daughter, but thanks to the unforgettable time we were living, she accepted without protest. 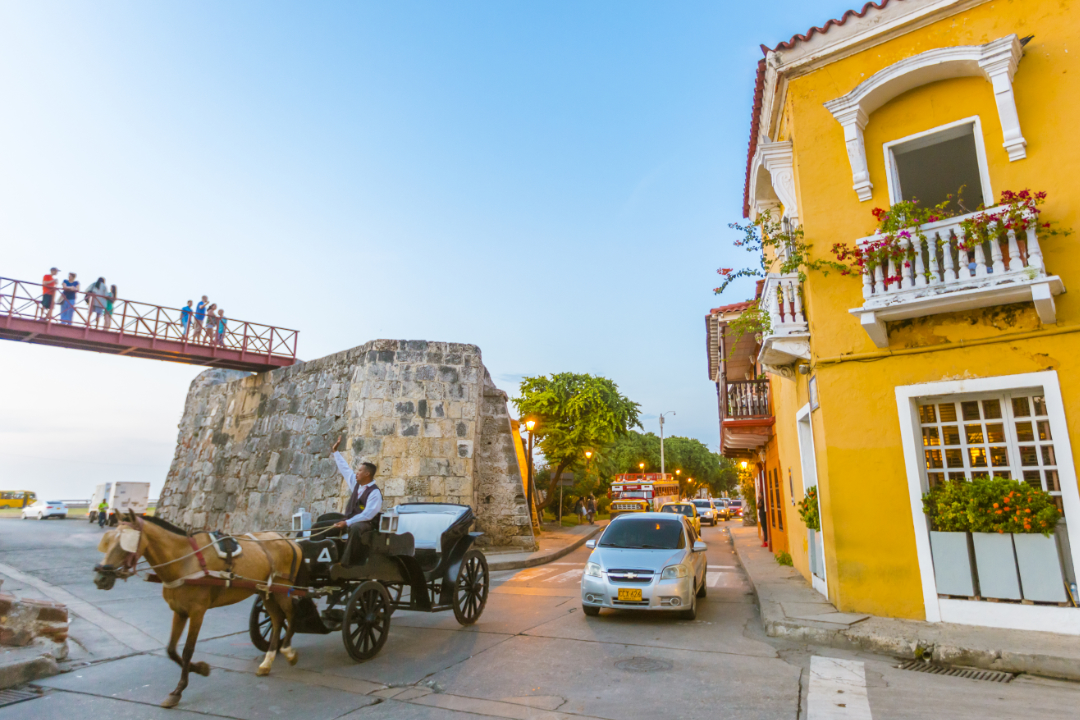 We said goodbye to Don Orlando and his beloved horse Edgar. While we watched the car move away, we felt something of nostalgia, but also the satisfaction of having lived a pleasant time without the cares of the modern world. Standing on the spectacular wall, we contemplated the last rays of the sun as they merged with the water on the horizon.

When we turned around and started our way back towards the squares downtown, a gorgeous moon, in its increasing phase, loomed before us and seemed to be hanging from the dome of the Church of Santo Domingo. Leaving behind a beautiful afternoon and receiving a dreamy night, we continue in the company of my daughter enjoying this charming city that seems to be frozen in time.
Register your business or event
Advertising
Advertising
Advertising
May I help you?
Contact us
X