The Streets of the Historic Center of Cartagena de Indias: Memories of the colony

The streets of the historic center of Cartagena de Indias are a mystery to those who walk them. "Strange and friendly" names evoke the curiosity of people and strangers. Our grandmothers know the history and happily, tell their generations what happened in the city of Cartagena years ago. The history of its main streets: 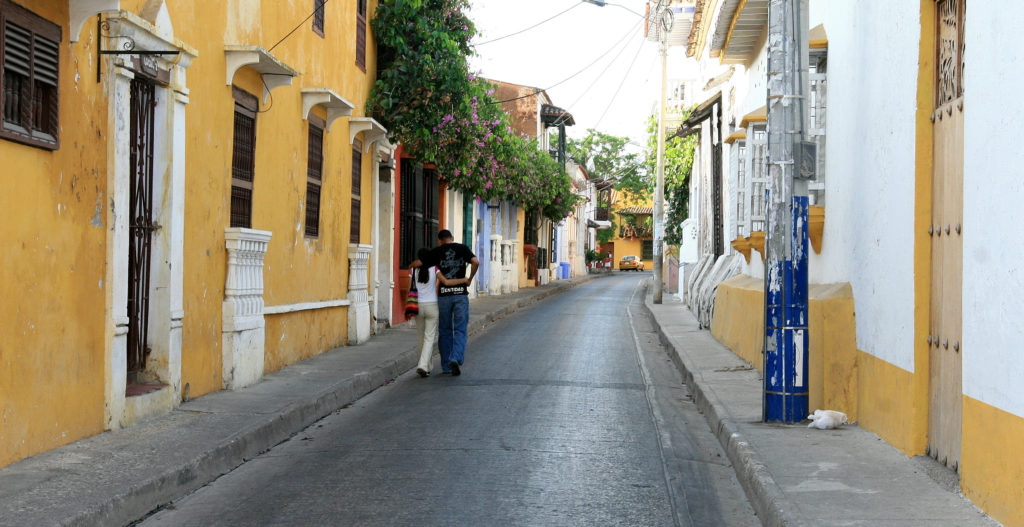 It was mandatory to use this street to get to the cemetery of San Diego. At that time the epidemic of the Plank ended with a good percentage of the population. Many burials passed through this street, and the people who carried the coffin stumbled and fell. The inhabitants said that a goblin had fun making the deadfall, and from that event, the street was coined: "where the dead lie down." 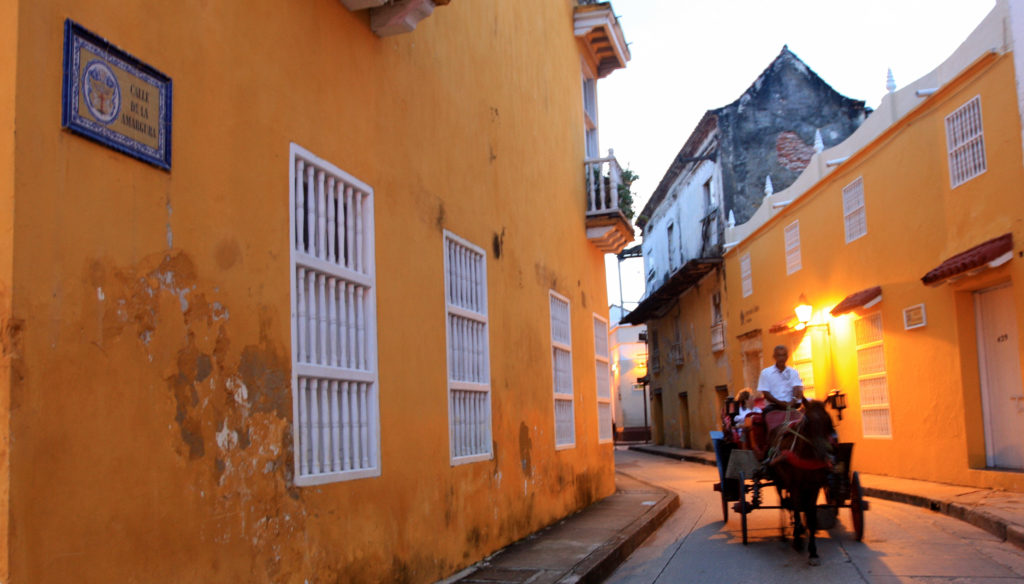 The street is located behind the Plaza de la Aduana, before reaching the squares of Bolívar and San Pedro Claver. In 1626, this road was part of the route that the heretics had to make, which would be judged by the holy office. In this last procession on June 17, there was Amaro Gómez and Pedro Sánchez. This street was the last before arriving at his place of torment. Then Pedro Sánchez said: this road should eventually be called "Calle de la Amargura,” later taking the name of Nuestra Señora de la Amargura. 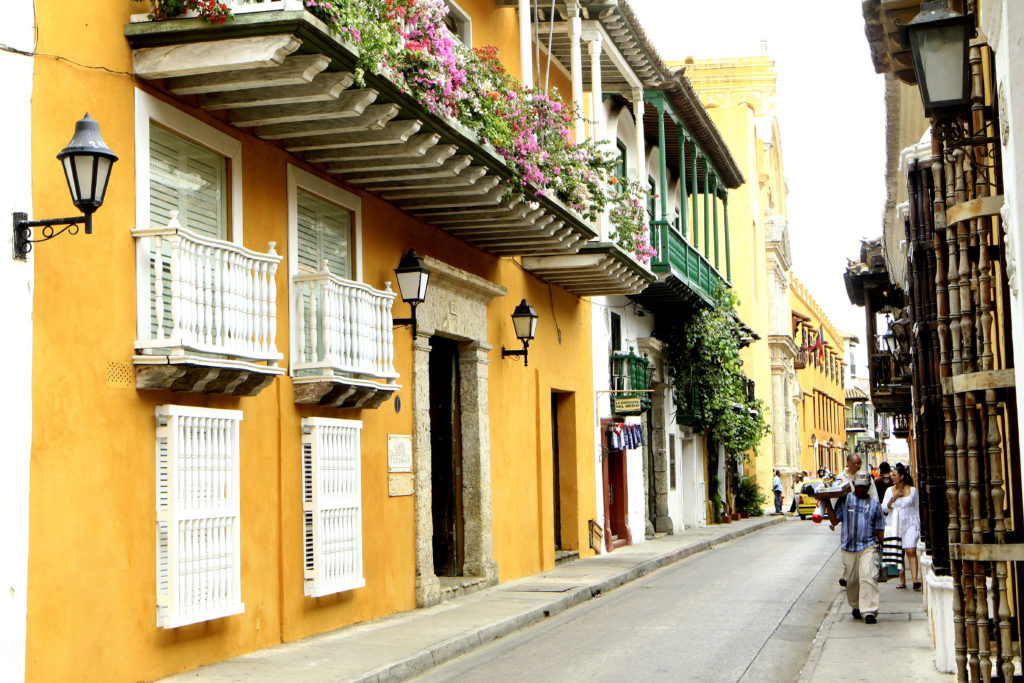 This street was briefly recognized as "The possessed carriage street." It is said that during Colonia Times, the neighbors saw a car leave one of the houses every night similar to a carriage, dragged by two horses engulfed in flames and some person with sparks of fire through the eyes, lost trying the get into a house on Calle La Factoría.

Know the representative sites of the Historic City HERE 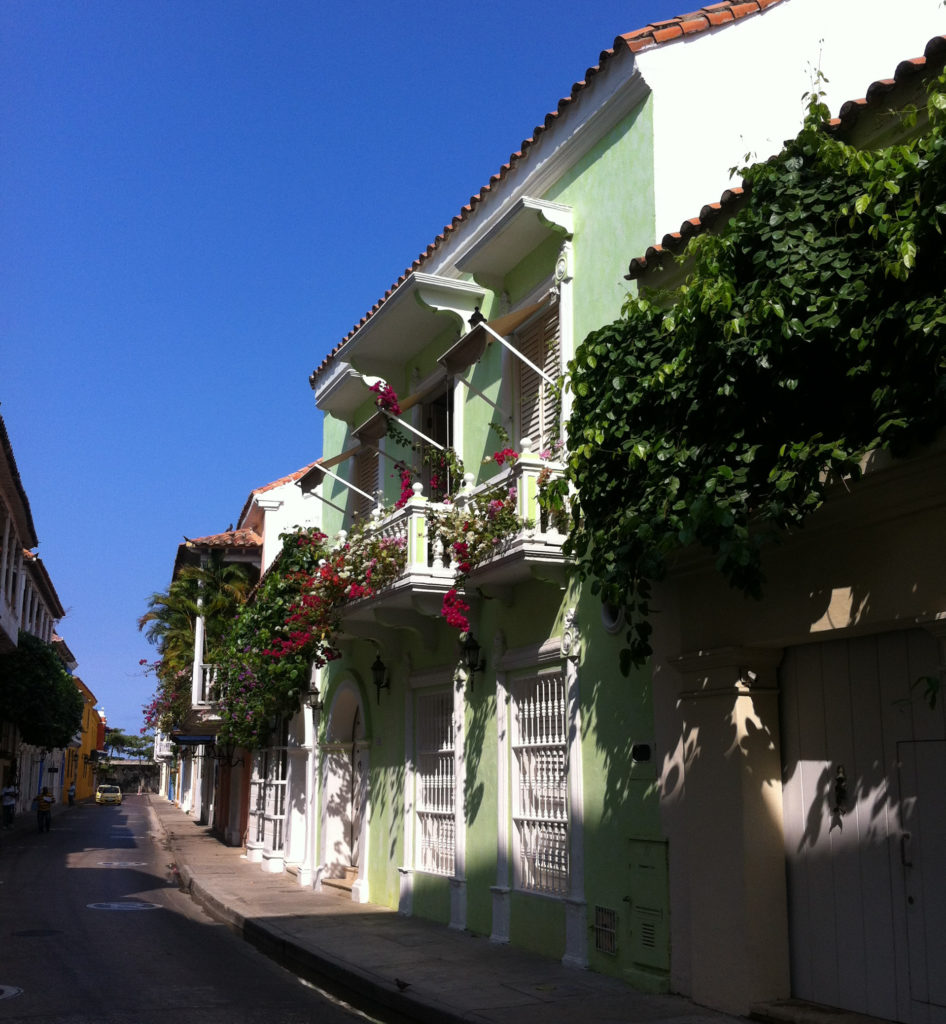 The street was originally called Calle de Nuestra Señora de Los Angeles and located on the street immediately on Calle de la Amargura. In 1600, Governor Anastasio Zejudo informed King Carlos VI the construction of the walls was ready. The King decided to arrive in Cartagena to confirm that the work had been worth the cost. The King and his companions came unannounced disguised as women, they stayed in the street of Nuestra Señora de Los Ángeles and left days later. The inhabitants were intrigued by this trip, who could not find the identity of the ladies. 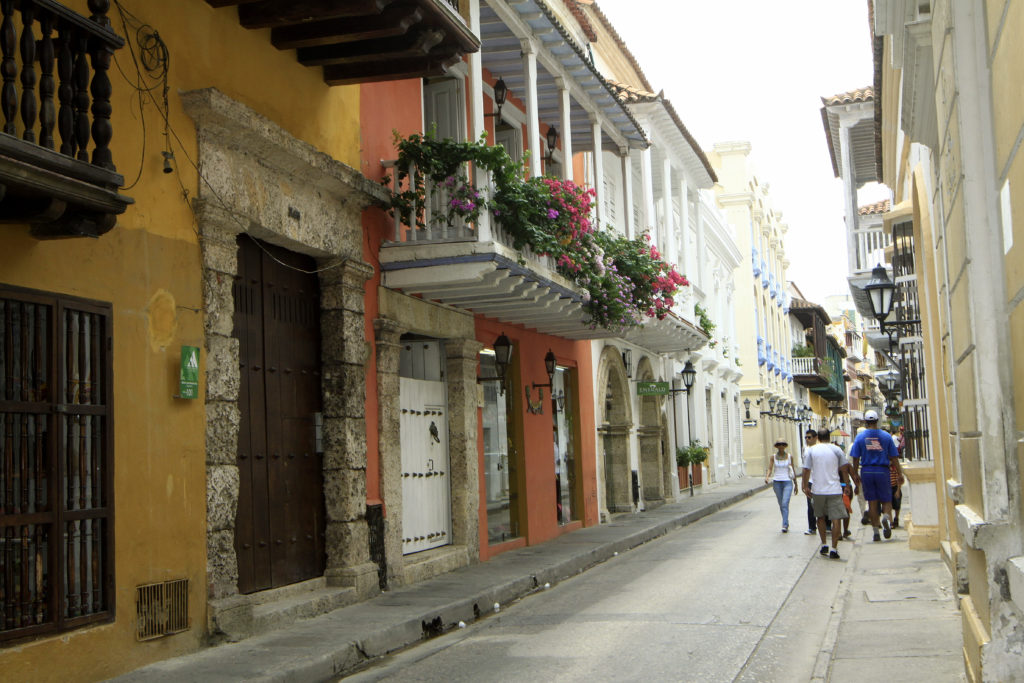 It is said that when the convent was founded, the devil made several appearances to the parishioners who came to the temple, to hinder them in their way. The people began to ignore him so well that one day, furiously, he filled this street with huge stones to block the people. The superior temples learned what was happening by the noise of the parishioners who could not reach the church. He went out, and when he saw the pile of stones, he invoked the name of God and pushed the stones. A smell of sulfur was felt all over the place, and there were laughter and fluttering, while the stones fell to the ground.

Do you like photography? Take advantage of the Tour of Photography through Cartagena and take the best images 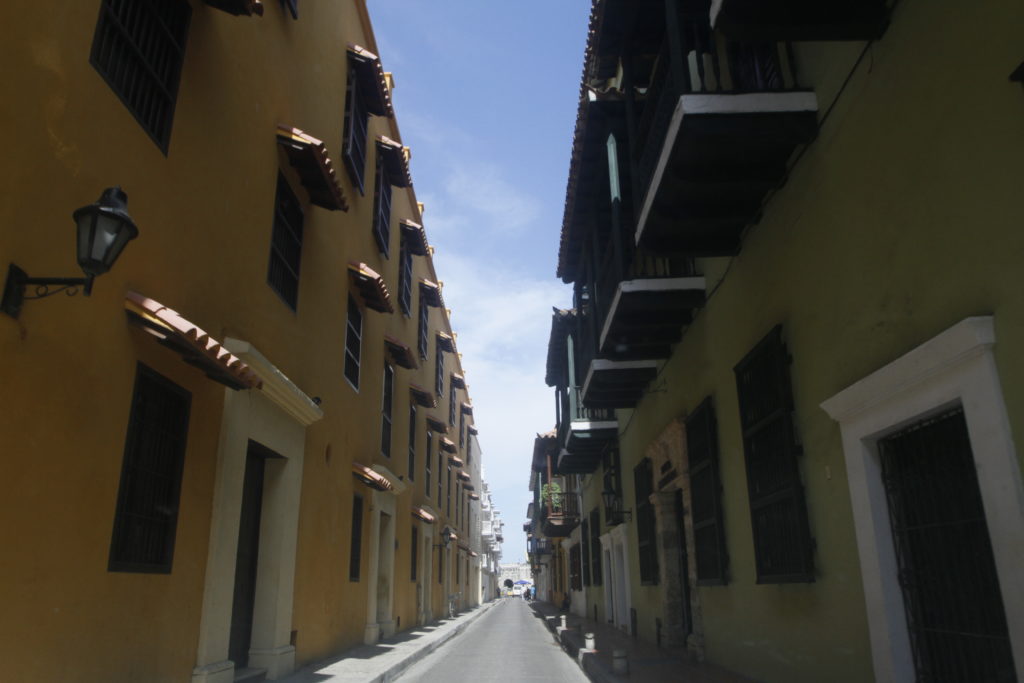 Continuing along the street of Nuestra Señora del Carmen and looking to the left, you will find this street. The legend of this one, speaks of a Mohán who jumped into the well of one of the houses in the street, every night. It disturbed the sleep of all its inhabitants. A religious lady called Doña Dolores Pasco de Vela, promised the virgin of Carmen to found a school in her name if she eradicated the specter. Soon, he did not know about Mohán again.

During the Colonial Times, alcohol and tobacco were the privileges of the Spaniards. The only authorized liquor store was founded on this street, and it is this building that gives the name to the street. The presentation school, eternalized the work of Gabriel García Márquez, as it was the school where Fermina Daza studied, the protagonist of Love in Times of Cholera. In its patio, there are tunnels that a viceroy used during the Colonial Times, to reach a vault of the Castillo San Felipe de Barajas. 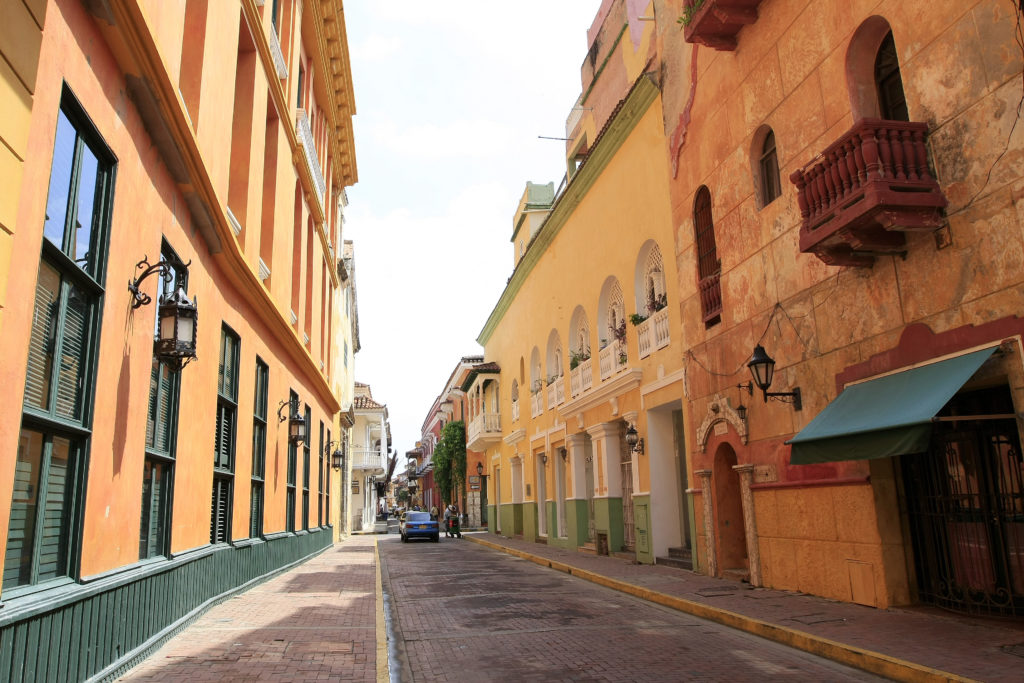 When you reach the corner, turn your head to the left and see if a green figure appears, because the legend tells that in one of the houses on this street lived goblins. The night that General Tomás Cipriano de Mosquera celebrated his victory in the Battle of Cuaspud, many residents of Ricaurte Street could not sleep because of the clash of swords and glass bowls bursting in one of the houses. The next day, they asked the owners of the house the reason for the celebration and they responded that they had fallen asleep early, although the lady of the house dreamed of a great party given by General Mosquera. 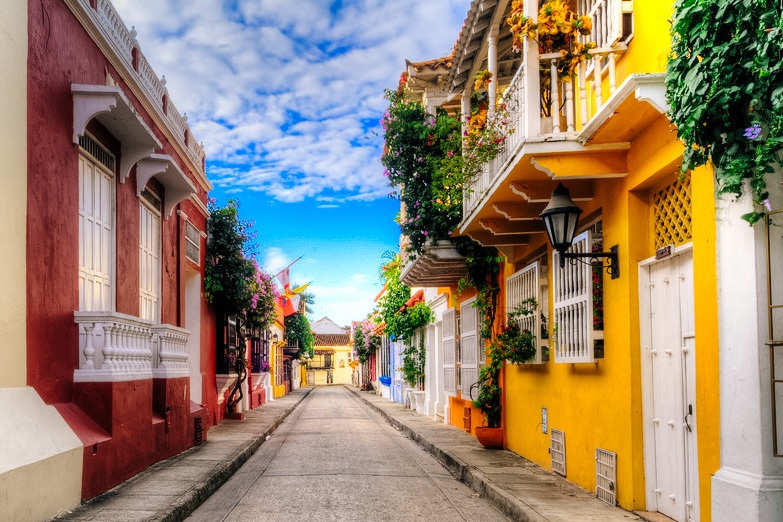 In the opposite direction to the bastion of Santa Cruz, following the same street on Gastelbondo Street, the old street of Our Lady of the Blessing of God tells us this tragic story: A beautiful young woman, María de Encarnación, was engaged in marriage with Don Juan Pérez de Guzmán in 1658. They maintain a relationship, but marriage is not given. One day Pérez de Guzmán leaves the city without warning. Urged by the morality of the time and keeping the secret of pregnancy, the young woman decides to take her own life with the silk blanket that she wore on Sundays to go to mass.

The legend of this street impresses the knowledge, how the neighbors of that time, commented the noise of something that crawled and carried a bell, but no one looked out. In 1608 the mayor devoted himself to watch the street, and that is how he discovered a giant rattlesnake crawling. The president made a spell with his magic figures in the air, and the animal immediately took the form of a woman. Although he asked for forgiveness, he was sentenced in 1614 to two hundred lashes and definitive exile for heresy.

Enjoy a historical tour through the streets of Cartagena HERE

Stop and look at the houses, one that seems scary and resembles a miser named Miguel Cuero who decides to change the surname to Quero so as not to be the target of ridicule. One night he had the suspicion that they had entered to steal and ran to the trunk where he had his treasure. He was checking when the top of the trunk fell on top and took his life. When the body broke down, the neighbors noticed. From there, the legend is born about the people who went away frightened by the strange sounds in the house.

Venture to know Cartagena for yourself here .