Palenqueras, a symbol of Cartagena

Dressed in colorful costumes and wearing a great smile, the Palenqueras embellish the Historical Center of Cartagena de Indias, becoming part of the landscape. The reason for their name is due to their origins, because these women, who sell delicious tropical fruits and delicious sweets, are native to the first slave-free’s people town in America, called San Basilio de Palenque, a district of Mahates-Bolivar.

You can also be interested: Cartagena de Indias, the most beautiful city in Colombia 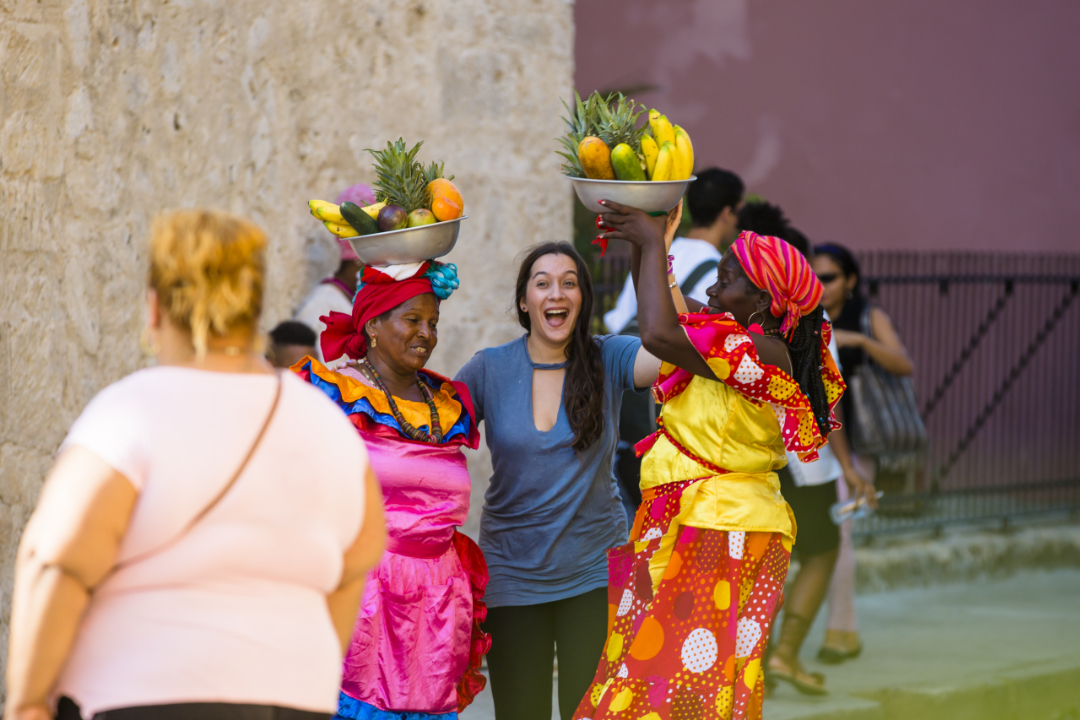 Descendants of enslaved Africans, who managed to escape and settle in places of difficult access, today they cross the walls again or walk through the streets and monuments of the city. Since the sun begins to shine strongly, until it seems to be lost in the Caribbean Sea, they offer to locals and tourists a variety of exquisite fruits such as watermelon, mango, pineapple, papaya, among others.

Some of these women travel daily from their homes in Palenque to Cartagena. Others, like Mrs. Eufrosina, have migrated to the city, because in this place they have been welcomed. Tourists enjoy talking with them while they buy portions of delicious fruits or exquisite salads they fix, while learning about their lives and about the history of La Heroica from a different perspective.

There is no doubt that the palenqueras have become another attraction of the city. You can find them in tourist places such as the beaches, the San Felipe Castle, the Clock Tower and in plazas and parks of the Historical Center, such as Plaza de Bolívar, and Plaza San Pedro Claver; you can also reach them on the outskirts of the Santo Toribio Church, they walk the streets and sit on the corners, in small groups and wearing their long skirts that draw attention for their colors.

Mrs. Eufrosina has dedicated a large part of her life to selling fruits and sweets. For ten years she traveled the streets of the Historical Center and Getsemaní, places where she sold her products to countless tourists, national and from different countries of the world, but mainly from Europe.

Now, this woman walks through the popular neighborhoods of the city proclaiming popular sweets such as "caballito” (little horse), “alegría” (joy), “cocada” (coconut sweet), “enyucado” (yucca cake), among others, and people do not resist the temptation to eat their delicacies prepared with ancestral recipes. With her peculiar wiggle, this woman's feet have traveled unimaginable distances, holding tightly, over her head, a type of round tray (a circular and wide container) where she carries her products.

The culture of Palenque is unique. This town, in addition to transmitting recipes from generation to generation, counts with its own dialect and festivals, such as the one of Tambores (drums). In La Heroica, tourists are happy buying from these women, and also taking photos with them to accumulate memories of a fascinating trip to Cartagena. It is customary to give a tip for the photographs.

You can also read: Cartagena de Indias and its contagious slang words

The palenqueras are a historical and cultural icon of Cartagena de Indias. Getting to know them is another reason why thousands of tourists arrive in the city. Nothing better than eating juicy fruits or traditional sweets while these kind and merry women make you smile.