Stories and mysteries hidden in the streets of Cartagena de Indias

Cartagena de Indias and its beautiful Historical Center, a World Heritage Site, are full of gorgeous streets with curious names. These places are so recognized and some are so easy to remember that no nomenclature is needed to locate and traverse them.

The names of these streets, that go back to the time of the colony, hide stories behind them. Centuries of tradition and various cultural blends have been shaping these urban spaces that, besides connecting different sectors on the downtown area, are an important part of the imaginary and identity of Cartagena. 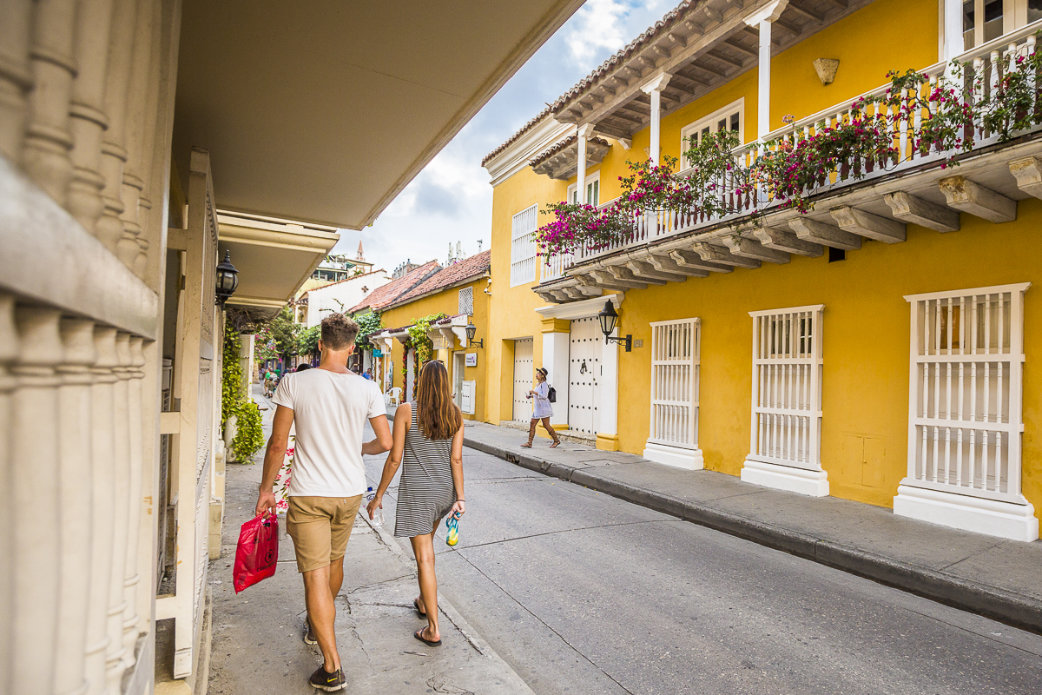 Either by foot, cycling, or maybe on board of an old carriage, getting lost among the streets of this amazing city, will always be a magical adventure. In here we share 10 of the most memorable and striking streets you should know.

On this street, which was initially known as “Calle Canabal”, used to live a girl from a family of fishermen who made a modest living. The young woman had the habit of keeping for herself the guts they extracted from the fish, in order to eat them after seasoning and frying. After people learned about the girl’s habit, they did not take long before starting to call her “La Tripita” (something like the little gut). Later, during a religious holiday, the same young woman decided to dress in a more formal way using the stockings her godmother had given her. It attracted so much the attention of the neighbors, that from that day, they called it “Tripita y Media” (little gut and stockings), and with time the street where she lived also kept this name.

In the beginning it was called “Calle de Nuestra Señora de los Valles”, and later “Calle de la Imprenta”, because the first printing press in Cartagena worked there. With time it was finally named “Calle del Tablón” (the plank street). This name would have two possible origins: the first was given because, according to some people, in this place died the first patient of an epidemic that hit the city and what they called “the plank”. The second refers to a large wooden board that neighbors used to put on the road so people would cross from one sidewalk to the other on days with heavy rain.

Unlike the tragic stories of some other streets, this one alludes an event with a happy ending. People tell that in this sector of Cartagena resided the Fernández and Villarreal families. One day love knocked on the their doors, and also the misfortune was almost about to sneak in. Jerónimo Villarreal fell in love with Constanza Fernández, a situation that created discomfort among these two groups, to the point that one day they decided to fight each other with their swords, and they were really close to initiate a battle right there.

In the middle of the dispute, the bell of the altar boy, who marched behind the priest, was heard. They came from the temple of “Santo Toribio” and were heading to visit a seriously ill patient. When the rivals realized the holy father would meet this unpleasant spectacle, they decided to stop the fight and began to march behind the group. After the sermon, both the Fernández and the Villarreal, felt renewed and without hatred in their hearts, so they held hands and from that moment on peace took over these two families. After this fortunate event, the formerly called “Calle Teatro de la Refriega”, obtain its name “El Santísimo” (the holy one).

Many of Cartagena’s traditions come from from religious rites. Until the end of 1875 there was the custom that, during Easter, for Good Friday, the image of “Nuestra Señora de la Soledad” was taken out of the church at midnight to be taken on a walk across several streets of the Walled City heading towards the temple of “Santísima Trinidad”. In there, the image use to stay for about an hour before it was taken back to its home before dawn. Thanks to this practice the street got the name with which is currently known (loneliness street).

Initially a broad street known as “Nuestra Señora de la Luz”. In the year 1559, after the Dominican friars completed the construction of the “Iglesia de Santo Domingo”, they could observe that the foundations of the building were giving way to the side that faced this road. In order to solve this impasse, the buttresses, that can be seen today, were built, so the street became narrower and obtained its current name “Callejón de los Estribos” (the stirrups alley). 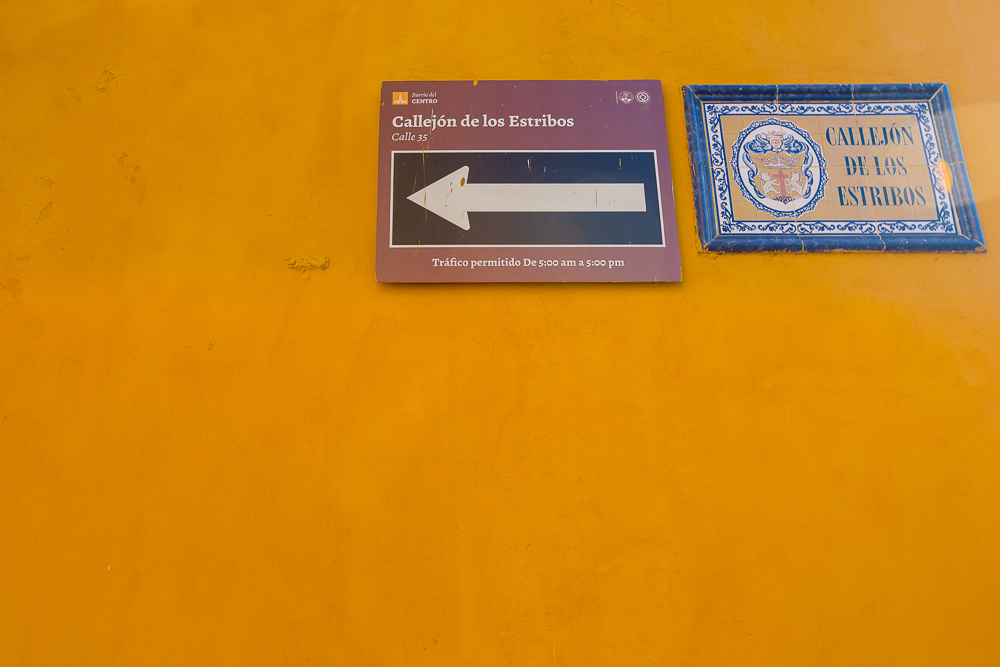 This is one of the streets of Cartagena that hosts myths and legends. It is said that when the Convent of Santo Domingo was founded, the devil appeared every morning to the parishioners who were going to the temple. The apparitions were so constant, that the neighbors ended up getting used to it, and they did not even determine it, so the devil became angry and decided to plan a revenge against the faithful.

The next day, the road was full of huge rocks that obstructed the normal passage to the temple. Facing this strange situation, the superior of the temple decided to take actions in the matter and approached the place where the rocks were. When he touched them, he exclaimed with strength: “Lucifer, you can never match God”. Later, as they push the rocks out of the road, a loud laugh was heard and, at the same time, a strong smell of sulfur invaded the surrounding area.

Place of great importance during the first years of Cartagena. It was previously called “Calle de Nuestra Señora de los Reyes”, in which the “Sargento Mayor”(the major sergeant), don Juan Toribio de Herrera Leiva, used to live. In honor of him, this road acquired its current name.

Despite the attempts of calling this street in so many different ways, since the colonial times the people has always referred to it with the same name. At some point in history, the Municipal Council gave the order that this street were named after the illustrious martyr of independence, Colonel Pantaleón Germán Ribon. Around 1570 it was given the name of “Calle de La Catedral”, and later it was attributed the name of “El Faro”. Finally, from 1681 to 1712, after the elaboration of a series of stone effigies to decorate the Cathedral with the shapes of Saints such as “San Pedro”, “San Pablo”, “San Gregorio”, and “San Sebastián”, the street adopted the name that still preserves nowadays (street of the stone saints). 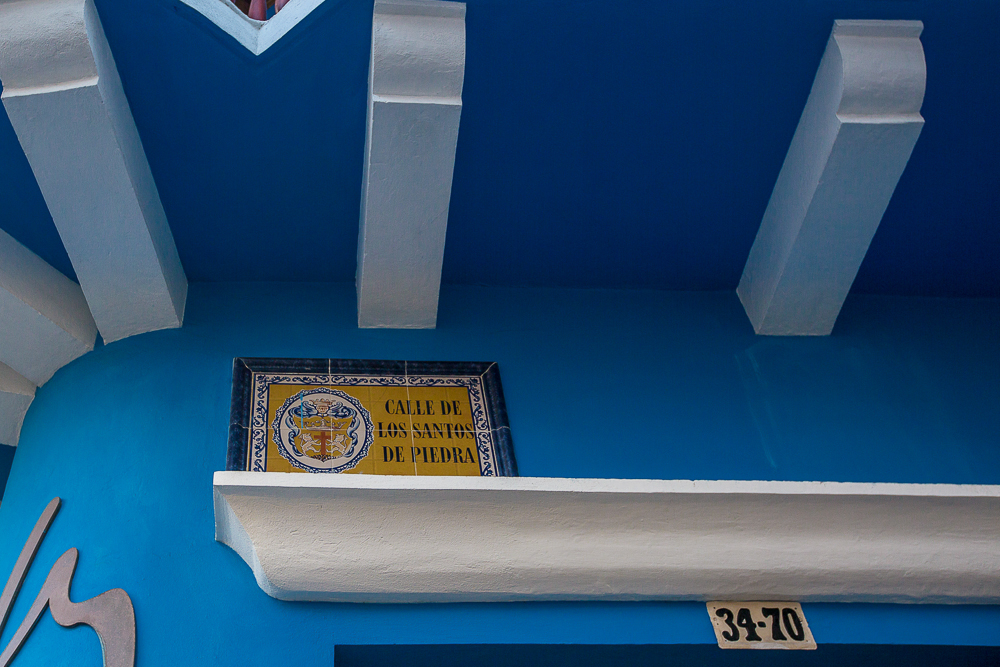 During the colonial times in Cartagena, this place was known as “Calle de Nuestra Señora de las Carretas” (our lady of the wagons). According with some testimonies, in this road gathered all the wagons that operated in the city. But there are others that attribute the name to military terminology, where the word “carreta” (wagon) means gallery. In this way, the carts served to reach the wall sane and safe when the squares suffered some kind of attack. With the passage of time, people adopted the name with which is currently known.

This street originated when engineer Juan de Semovilla y Tejada arrived in Cartagena to fulfill an order from the King of Spain, in which it was requested to demolish the Jesuits’ convent because the walls and their bastions were for the exclusive use of the military. However, when he noticed the architectural grandeur of the project, he decided to build an embankment that could serve as a buttress in order to preserve the largest balcony in America. In this space, that separates the convent from the embankment, it was born this street which, due to its proximity with the “Plaza de Armas” and “Plaza de Santa Teresa”, was the place where the troops made daily the round with which they guarded the Walled City. From that time, until today, the street has been called “Calle de La Ronda”.

History, oral tradition, myths and magical reality, surround these and many other streets of the Historical Center of Cartagena in which it is a delight to get lost and forget about the worries of the modern world. Remember that the only thing you need to enjoy this living landscape, is the desire and energy to appreciate each and everyone of its beautiful and curious details.
Register your business or event
Advertising
Advertising
Advertising
May I help you?
Contact us
X