“India Catalina”, the story behind the monument

The “India Catalina” monument, in Cartagena, as well as the historical character it represents, does not escape the myths and the oral tradition that over time becomes fuzzy and calls into question several of the facts that we took for granted. Nowadays, different people question the theory that portraits “La India” as a traitor who sold her people for the benefit of the Spanish invaders, and some others which see her as an illustrious representative of indigenous culture, who prevented the tribes of these areas from being totally devastated by the colonizers.

It is a historical figure rescued from oblivion and from who, until relatively recent times, we have been able to discover true information. Loose data from different moments of her life that, although do not allow us to stablish a value judgement about her motivations and consequences from her actions, they do allow us to know the importance and prominence that an indigenous woman reached in an era where her race and gender were persecuted and rejected. 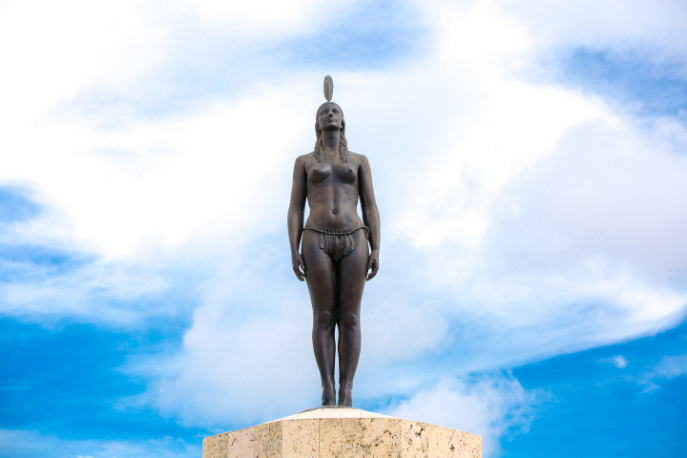 Just as the studies of her life should go on, it is also important to collect, in an organized way, the information that surrounds the construction of her monument. Although it is no hard to believe and understand, the truth is that there are not many certainties in the fresh memory of the people about the motivation and details around the most photographed statue in Colombia. Therefore, to solve the mysteries behind the elaboration of this work of art, we turned to the offspring of the Maestro Eladio Gil Zambrana (1929-2011), who, led by her daughter Ana Raquel Gil and her husband, Oliverio Paternina, clarified some of the myths that even to this day remain about this monumental statue.

Despite the last report of the “Real Academia de la Lengua” (Royal Academy of the Language), where they use the word “indio” in a very derogatory and wrong way, alluding to someone with a low cultural and social level, this Indian, our “India Catalina”, is a source of great pride and admiration from the whole world towards a noble culture that was practically extinct in its entirety.

This feeling was what Maestro Eladio Gil wanted to immortalize in his work, the dignity and strength of a race that looks to the future without forgetting its valuable origins. 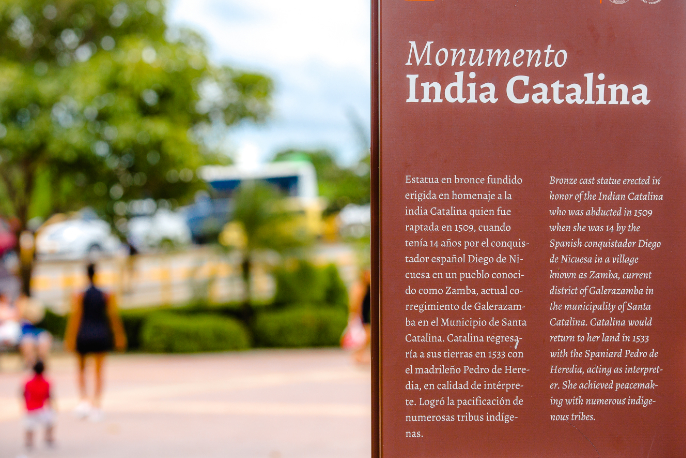 Origin of the idea

The “India Catalina” monument is closely linked to the International Film Festival of Cartagena, but unlike what most of the people think, the statuette of the Festival came before the monument. They were different creative processes, each one valuable, but aesthetically and conceptually different, beyond portraying the same character.

It is Victor Nieto who comes up with the idea of making a film festival for Cartagena. Later, after its first two editions, he has the idea to present the winners with a small trophy, like the ones used in different film festivals around the world, but he wanted it to represent the city of Cartagena. At that time, he asked Eduardo Lemaitre, lawyer and historian from the same city, to help him find a “symbol of Cartagena” that could be materialize. He suggested to shape the statuette in the form of the “India Catalina”, that by the time was a figure who started to fade from the collective memory of the region. Even Victor Nieto himself did not remember who she was, so Lemaitre had to point her out in the city’s official shield: there she was, a woman sitting on a rock. For the statuette they decided to recreate her in a standing up position.

This is the sequence of events that took place so that today Cartagena is adorned with one of the most beautiful and representative monuments of the country:

1. The International Film Festival of Cartagena is created in 1959, with the lead of Victor Nieto.

2. In 1961, Nieto himself comes up with the idea of making a figurine with the shape of a character standing, like the Oscar award from the American Academy. It is Eduardo Lemaitre who chose the “India Catalina” as the ideal character.

3. The elaboration of the statuette with the “India Catalina” figure was entrusted to Héctor Lombana, who shaped with a very different form to the one that could be seen years later in the monument It is a faceless figurine, plump and with dropping shoulders. Its feet are not steep, and it does not have the feathered “chinchorro”, but a garment that practically covers all its legs.

4. Thanks to the acceptance that the Festival had, Victor Nieto, with the support of Juan Arango Álvarez, the Mayor of the time, and the “Empresas Públicas de Cartagena”, among other entities, joined forces to make a monument to honor the “India Catalina”.

5. In 1974 they called the Maestro Eladio Gil to make a large-scale version of the Festival figurine. The Maestro told them that the Lombana’s model did not work out for him, and he decided to make all the changes he considered necessaries. The final work was so well received that eventually the Film Festival organizers opted to make the statuette in the shape of the monument. Today’s version looks so much alike to the one sculped by the Maestro Eladio Gil. 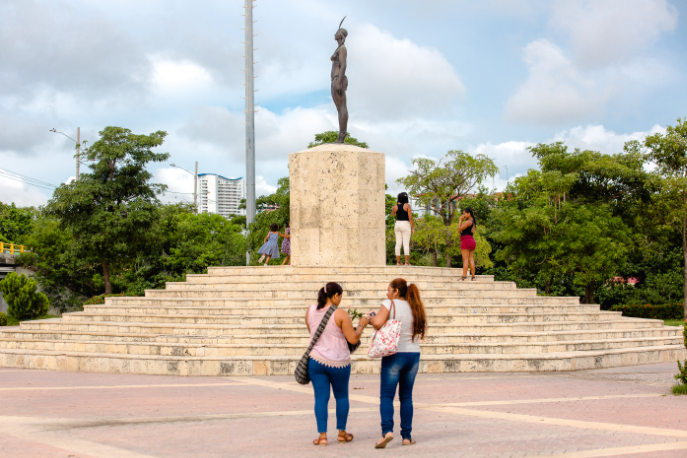 1. Unlike the great civil works of the country, Maestro Eladio Gil was given a strict delivery date, so he only counted with three months to build the monument. He had to work day and night to meet the challenge.

2. It was the Maestro Gil himself who, to perform such a monumental task, had to elaborate the tools with which the statue of over more than 3 meters high was built, since by that time there were none in the city. Likewise, all the staff involved in the process had to be trained during the construction itself.

3. Maestro Eladio Gil wanted to build a statue of almost 6 meters tall, but because of the logistics difficulties of the time, he had to limit himself to the height offered by the roof of his workshop, which was approximately three meters and forty centimeters.

4. The young girl who served as a model to shape the torso of the monument is called Judith Arrieta, a close person to the family who posed for the Maestro wearing a pair of small shorts and in the company of her mother, by request of the Maestro himself. Interestingly, Judith, as well as the “India Catalina” in her childhood, currently lives in Santo Domingo. The face was made from the historical studies of the time.

5. To carry out this titanic task, the Maestro had to build the statue in three separated segments: Legs, torso and head. After the meticulous process of elaboration, they were soldered to give shape to the beautiful figure we all know today.

6. Originally the statue was delivered with a really pretty pedestal made from carved coral stone, which resembled the base of a trophy. Unfortunately, this feature was damaged when the monument was moved to its current location.

7. In its original position, la “India Catalina” was looking towards its place of birth, “Galerazamba”. At its base there is a pendulum fixed to give the statue the strength to endure strong vibrations.

8. When the construction of the “India Catalina” ended, exceeding all expectations, an odyssey began in order to move the monument from the Maestro’s workshop to the place where the statue was going to be displayed. Walls and doors had to be knocked down to get the monument out, and it had to be driven through the unpaved streets of the time. 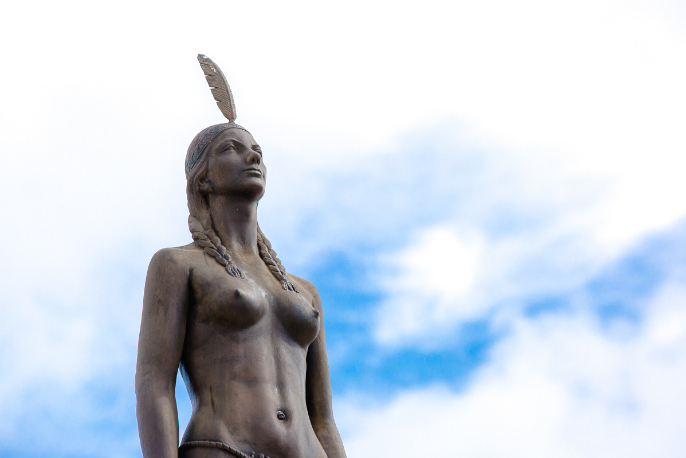 If you have not visited this monument yet, what are you waiting? Any time is good to go and take pictures of one of the icons, not just of Cartagena, but also from Colombia itself. If you already know the statue, there is not a limit of times to enjoy this magnificent piece of art, cultural heritage of “La Heroica”.

Let’s enjoy, as much as we can, this gift from Maestro Eladio Gil Zambrana, Honorific Son of the city. A monument that keeps showing to the world an “India” that looks haughty, proud, curious, imposing and with great boldness, just like the city where forever will dwell.
Register your business or event
Advertising
Advertising
Advertising
May I help you?
Contact us
X